December's Digit's Linux DVD brought glint in the eyes of Linux lovers. It packed up several full Linux distribution ISOs. Yesterday, I wasn't doing anything so I thought lets try out something new. I randomly chose DreamLinux3.5RC4 for the ordeal. Its a debian based distribution with Xfce4.4 as the Window manager. The live CD detected all my hardware correctly and booted lightening fast!!! Faster than Ubuntu and XP. But it didn't mount my existing ntfs and ext3 partitions. The interface is as fast as Windows 3.1 on a latest machine!!! Kudos to Xfce! Now, after fiddling with it I liked the speed and decided to install on my HDD. The installation isn't wizard based like Ubuntu but I quickly figured out everything. Disk partitioning was easy with the GUI of GParted and I shrunk a 39GB ext3 partition owned by Ubuntu to 25GB and created a new 14GB partition for Dream Linux. The installation was fast too. In about 10-12 minutes it finished all the operations. I restarted. The Xfce desktop greeted me and thankfully, the existing partitions were mounted in /mnt. But I was puzzled about not being prompted for user-pass during login. That can be configured anyways ;) The default cool apps present were:
GIMP
Rhythmbox
Totem
OpenOffice.Org
Inkscape
gThumb
xsane
AVIDemux
gFtp
Pidgin
Thunderbird
Iceweasel
etc....
Since it is a Debian based distro. so it comes with Synaptic for installing apps easily. I tried to install Opera but couldn't find it in the repository even after reloading! Duh! They're new and its not a final version so forgiven!!!
The browser Iceweasel is a modded FF3.0.1 with Xfce interface. The PDF viewer is fast as Schumaker! All the codecs for all multimedia formats are pre-installed unlike Ubuntu and Totem is the default media player.
And about the modem, it easily detected my Sony Ericsson P1i without any hitches and glitches and mounted the USB modem at /dev/ttyACM1. I quickly configured wvdial and in under a minute I was hooked to the Internet. The browser is very fast. A great experience.
The screenshot taker is in Accessories menu but unlike Ubuntu it doesn't auto capture on pressing PrtScr key. You've to manually set the time, then capture.
Final verdict
Speed: Best of all, I ever used
Usability: Not as user friendly as Ubuntu
Apps: Complete set of apps that anyone requires for daily use
Who can use?: Anyone who is a bit familiar to Linux(especially Debian based distros like Mint or Ubuntu)

One thing worth pointing is the presence of a dock at the bottom of screen for launching popular apps. But it is fixed and I was unable to move it anywhere on the screen, or add/remove apps to/from it.
Overall, a great Linux distro. for a typical home user. I'm attaching a few screenshots. 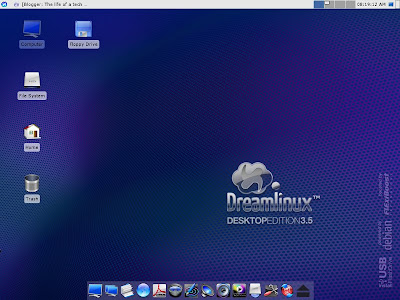 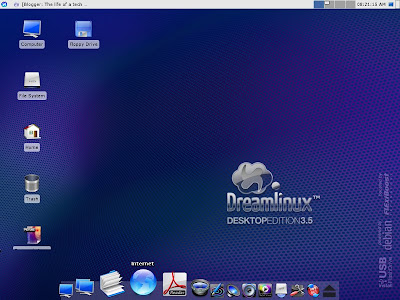 The app dock with mouse pointer on Internet browser icon 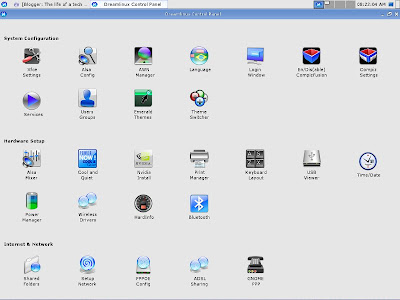 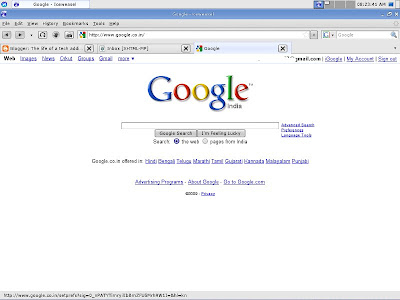 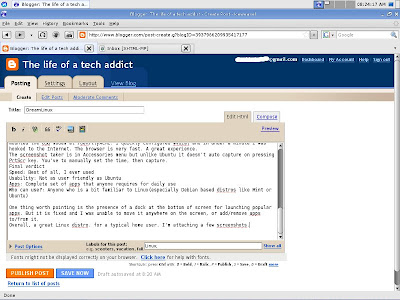 This blog post in the making, on Iceweasel
Posted by prab97 at Monday, January 12, 2009

Hi Prab97
Thanks for your try on DL3.5RC4 - I'm a moderator from the dreamlinux.org official Forums & I've just stumbled onto this.
Thanks for your little review & to clarify a few points:
Our DL3.5 launch is at end Feb '09 & you're welcome to try it.
You'll be pleasantly surprised at the many changes and improvements made since.
Your mounting problem was just a bug in rc4 & is solved.
You'll need to explore our EasyInstall app, from where other non-Debian-repo applications, including Opera can be easily installed.
Explore our DCP Control Panel & you'll find many gems, including the Avant Window Navigator(AWN) Dock switch/Enabler for CompizFusion effects.
See you!

Hi, thanks! Its a pleasure for me that an official DreamLinux representative came across my review and clarified some points. I'll be more than eager to try the new 3.5 as soon as it is launched and post th feedback.

I have tried to install DL 3.5 XFCE into hard disk. while live CD is working fine,HD install reports problem in grub loading for all options(MBR,ROOT,EXISTING GRUB etc)i am unabe to solve it, can u pl help me in finding a solution ? my ID sjdeen@gmail.com.
thanks in advance