On 6th of this month Opera released the second beta of Opera Mobile9.50 for us UIQ users!!! Contrary to the popular feeling that UIQ is dead and Opera too will ditch it. The new beta is great! I felt some improvement in stability issues and speed in loading large pages. They also changed the logo. Earlier it looked like the power key!! And the best thing of the new beta is the new Fingertouch technology. According to Opera's official blog:


Today we introduce Opera Fingertouch, a technology designed to make interacting with the Web easier and simpler on touch-based devices. Opera Fingertouch provides visual feedback when you hit a Web link, and assists you when you come across multiple links or other selectable elements in close proximity to one another.

Here's a video released by Opera officially about the new jargon:


I tried capturing the screenshot os fingertouch in action on my P1i but it didn't work. The screen capture apps weren't able to capture the display area of the browser. Only the address bar came. I tried two different apps TOSC(the Open Screen Capture) and CS(Capture Screen), but same result. I'm attaching a screenshot anyways. 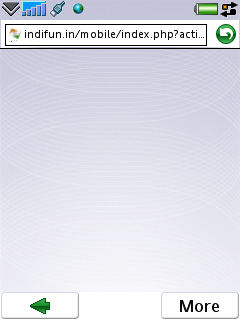