During the last session break holidays I carried my 4 yr. old aging PC to home and after the end of the holidays I didn't bring it back with me to my college. So, I needed a computer badly. Most of my work was postponed because of lack of a PC. So, I decided to get myself a notebook. Why a notebook? Why not a PC? Ok, here are the points that forced me to prefer a notebook over a desktop computer despite the fact that the life of a notebook is far lesser than a notebook.

1. True mobility! This is the most important point to prefer a notebook. I can carry my notebook to college, to home, to delhi, to singapore, to bangalore, to bathroom, to a neighbouring girl's room(ROFL! just joking) or almost wherever I go. That means I can compute wherever I am. A desktop is restricted to the table on the other hand.
2. A desktop pc has to be shut down in 2 minutes after a power cut. If the UPS is new and good it can run for 30 mins. A notebook can run upto 3 hrs. so no hindrance in any work.
3. To use a desktop PC, I need to be in same posture for long. Its quite tiring if I need to work for long. There is no such problem in case of a notebook. I can keep it on my lap, on table, on bed while I can use it in sitting mode or lying on the bed or any position I wish any time.
4. After purchasing a PC I need to buy several addons like webcam, card reader, wi-fi card, bluetooth dongle etc etc. A notebook although costlier has all of these built in.

There are several more smaller reasons which are the consequence of first point, so I ain't gonna write them all.

On 4th September I went to buy a Dell Inspiron 14 with 320GB, 3GB and C2D 2GHz T series processor with 800MHz FSB and a rated battery backup of 3 hours. After searching a few shops in Chandigarh Sector-20C computer market and getting the price quotes I found out that the cheapest deal for that machine was at Rs.35.5K inclusive of all taxes, a mouse and a headphone. But I wasn't contented, dunno why. I needed something else. Then I stuck on a Fujitsu-Siemens Amilo Si 3655. It was small, with a 13.3 inch screen. And it was powered by a C2D P8400 running at 2.26GHz and an FSB of 1066MHz. Memory was 4GB and storage 320GB. It was available at Rs.37k for people with an student ID card. And it had a rated battery backup of 4.5 hours. I took a demo and it looked fine to me. It was real fast. It was churning the hell outta Vista. The size was small. White color I liked. And the configuration was cool. And the screen was brilliant. Also it boasted of Intel Centrino 2. I noticed that only problem with it was that it had only 2 USB ports opposed to other notebooks which generally have 3 of them. No problem for me. I performed some research on net on forums and when didn't encounter any complaints from Fujitsu, I settled for it and purchased it!
Here is the official page:
http://ts.fujitsu.com/home/products/notebooks/amilo_si_3655.html
Here are two pictures of it in action. 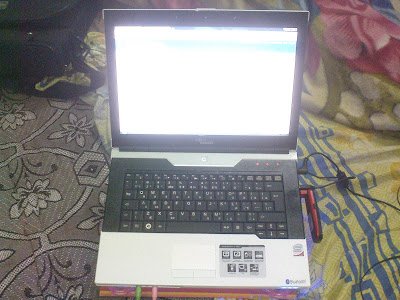 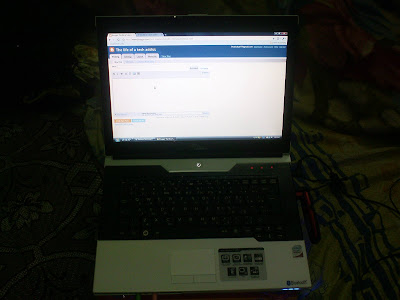 I am running Windows Vista Business on it. So far no problems. Working at dreamy blazing speeds. I had never before used such a fast computer. XP too wasn't this fast. The Intel GMA has a whopping 1.26GB of video memory!!!! So, I should be able to run any game on it without problems. But I haven't yet tested any game. No time for that now a days.
Posted by prab97 at Saturday, September 19, 2009